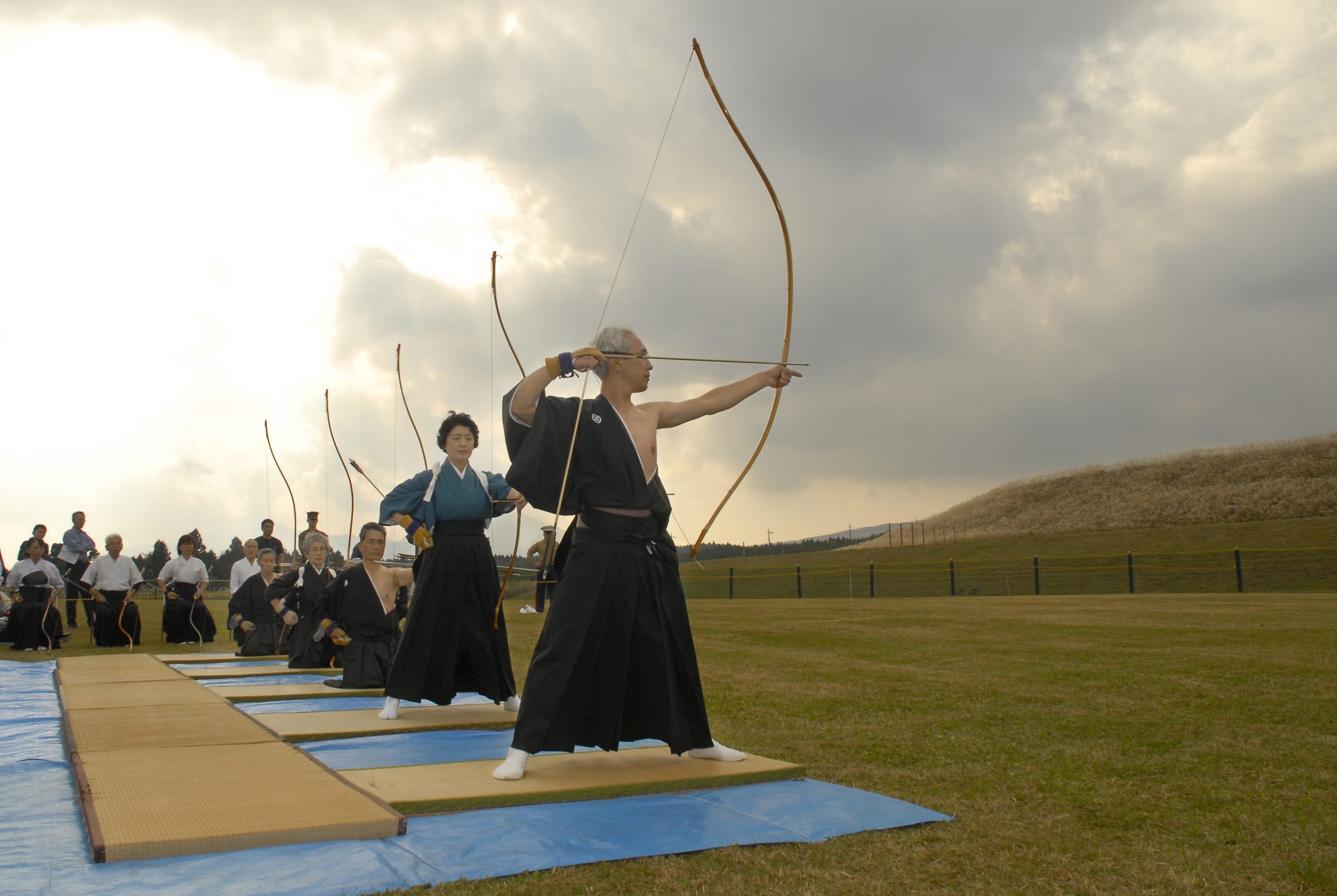 Humans have been practicing archery for protection and hunting since prehistoric times. For Japan’s samurai class, the bow and arrow was their predominant weapon of choice and was called kyujutsu: the art of archery. It was during the Edo period (1603 – 1868) that, as with many other Japanese martial arts, archery practices thrived. During this 250 year period, Japan closed its doors to all outside influences. It was a period of peace under the leadership of successive shoguns, and as a result of these favorable conditions, Japan developed and refined many traditional practices such as Sado (tea ceremony), kado, (flower arrangement), shodo (calligraphy), and of course, kyudo.

When the samurai class began to lose power during the Meiji era which was characterized by great changes in the structure of Japanese society, the number of kyujutsu practitioners decreased considerably.

Kyujutsu then turned into kyudo, a martial art more oriented towards sport and especially affordable by the masses, and a new form of the shooting emerged: the way of the bow. In this new way of approaching archery, the importance is placed not only on accuracy and strength but on self-improvement and one’s life journey. The introduction of firearms and guns in Japan meant that the bow and arrow lost its place as a weapon of choice. Instead, it evolved into a ceremonial, highly ritualized art form rather than a sport of means of warfare. In contemporary kyudo, an archer’s attitude and dignity are often considered more important than actually hitting the target. The focus has become the most important aspect of the practice to the point that an aura of serenity is said to envelop you if you concentrate hard enough.

Kyudo and its philosophy

The bow in Kyudo is big and measures between 212cm-245cm. Despite its simple form and the lack of modern functionality, it is cherished and considered as an object of veneration and should always be used with respect. When practicing kyudo one should wear a hakama, a traditional kimono worn by samurai. Men tend to leave their left shoulder exposed, while women have a breastplate to prevent injury.

Kyudo is supposed to develop the character of its practitioner not only in archery but also in his everyday manners such as interactions with others. A kyudo practitioner is supposed to show courtesy, humility, morality, and compassion at all times, and should be able to maintain composure and grace even under pressure.