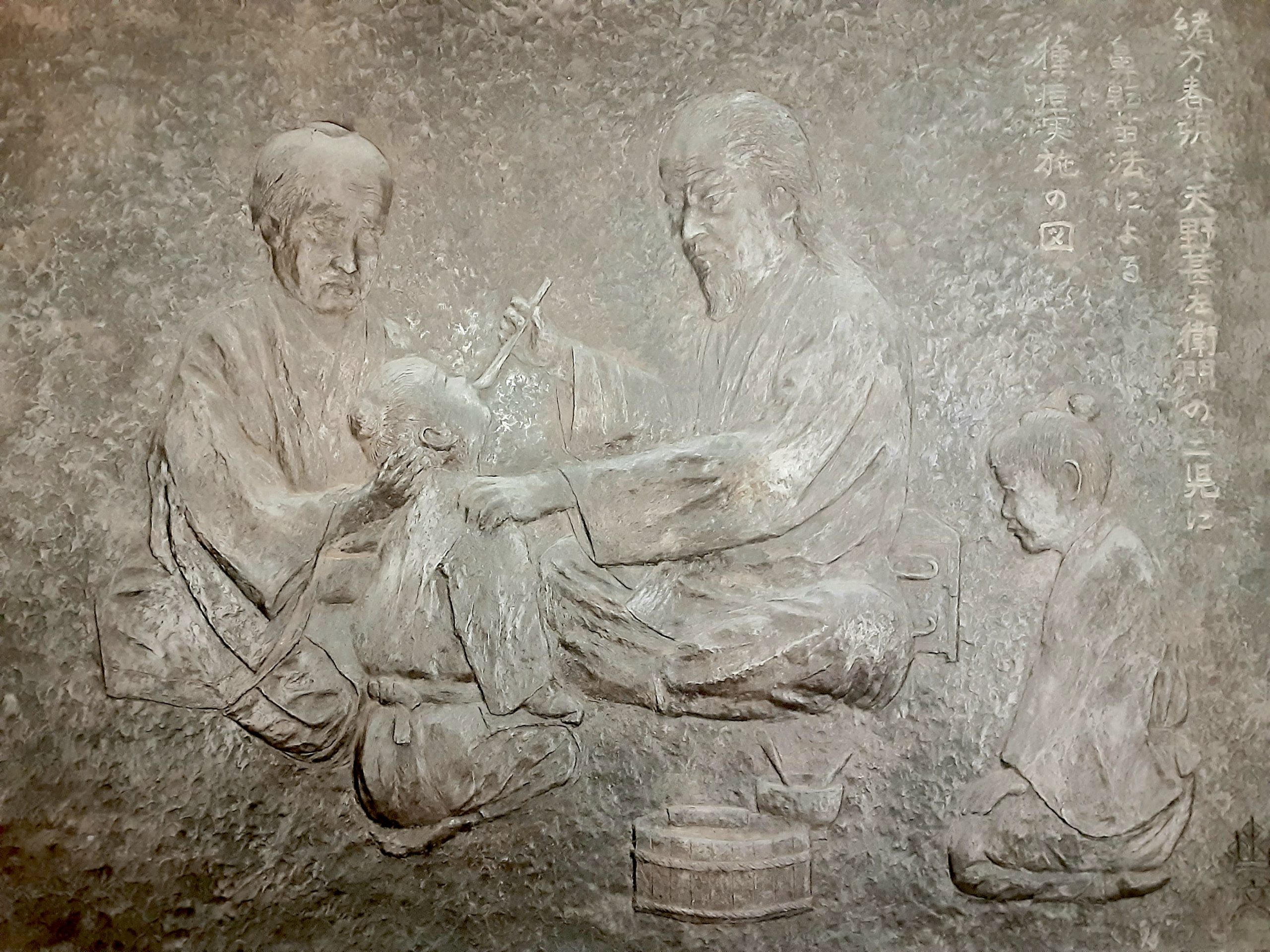 By Visit AsakuraFebruary 14, 2021No Comments

All over the world, February 14 refers to Valentine’s Day. In Akizuki, Asakura city, it is quite different. In 1790, that same day, the physicist and doctor Ogata Shunsaku (緒方春朔), successfully tested the first vaccine in Japan. This was to protect against the smallpox, a deadly and contagious viral disease that mainly affects children.

In 1789 there was an epidemic of smallpox especially in Akizuki. It is said that families at that time did not give names to children until they survived this disease.

The urgency of the situation prompted several doctors to do research to find a solution. Ogata Shunsaku, who was then the doctor of Akizuki clan chief Kuroda Naganobu, was inspired by a Chinese method to develop his vaccine, a powder obtained from pustules of human smallpox that is blown into the nose with a tube, so that a mostly moderate infection proceeds via the mucous membranes.

Amamo Jinzaemon (天野甚左衛門), who was an Akizuki figure, offered to test the vaccine on his two children. They developed a few symptoms but recovered on the tenth day. Then, the test was successful.

Ogata Shunsaku, a scientist with a big heart

Born in Kurume in Chikugo Province (now Fukuoka Prefecture), he was adopted by the feudal doctor Ogata Gensai (緒方元斉), who thus traced his future path in life. Like many young medical aspirants, Shunsaku first moved to Nagasaki to study with the interpreter Yoshio Kōsaku, famous for his knowledge and rich collection of Western medicine (Kyōgyu) material. Around 1789 he moved his residence from Kurume to Akizuki (秋月).

Ogata had a strong interest in the smallpox vaccination and was intensively involved in the “Golden Mirror of Medical Tradition” published in China in 1749 (Yīzōng jīnjiàn, 医宗金鑑, Japanese name Isō kinkan). He found his inspiration for the vaccine in the 60th book of this publication.

In 1793 he successfully vaccinated five children in Nagasaki. Many doctors at that time only passed on their knowledge to selected students or their own children. However, Ogata, made his knowledge public in 1793 in the script Shutō hitsujun ben (種痘必順弁). Rather than writing his book in Chinese as was the habit for science subjects, he wrote it in easy Japanese to be accessible to the greatest number.

In 1795, he accompanied the ruler of Akizuki to Edo (now Tokyo), where he performed numerous vaccinations and instructed doctors from other parts of Japan. Between 1790 and 1796 he gave about 1,100 vaccines to children.

As a result, Ogata gained a national reputation and trained students from many regions of Japan. He died in 1810 at the age of 63 and was buried in the Chōshō temple (Chōshō-ji). A memorial in front of the Amagi-Asakura Medical Association Hospital commemorates his historic pioneering work.

He received a title of nobility from the 119th emperor Tomohito for all his work and his contribution to the nation.

In 1796, the English country doctor Edward Jenner developed a vaccination method with cowpox, which significantly reduced the risk of death. In 1849, the German doctor Otto Gottlieb Mohnike, stationed at the Dutch trading post in Dejima, succeeded to demonstrate the effectiveness of this new procedure. Japanese population, which is used to the vaccination concept thanks to Ogata, welcomed the new vaccination.

Mohnike died in 1887 of complications from a stroke. The grave slab in the Old Cemetery in Bonn was restored in the summer of 2000 with the support of the Japanese Society for the History of Medicine .

In 2021, the Akizuki Museum organised an exhibition with the help of the descendants of the Ogata family (many of whom are medical researchers) who provided unique pieces (books, documents, certificates, photos, tools, personal effects, etc. ) for the duration of the expo.